Hey Everybody, Let's Have a Party!

I have so much to share!  First I'll start with Don's Birthday Muzak Bash, a flippin' fabulous party I threw on Saturday, March 11!  I had many friends from Options and Mains'l there at the Warehouse Room of Monticello Community Center, so many that we went through 7 pizzas!  The plan was to get there and set up before everyone showed up... But since I had to pick up pizza and also because I procrastinated on packing my gear I was a tad late to my own party.  Thanks to my best friend, Tyler I wasn't too far behind!  He was a big help in me getting a move on and loading my keyboard, guitar, amps, etc. There was this big ole farmer's market and craft show going on at the same time so parking was scarce.  Other than that things went off without a hitch!  I had a blast performing my music there for 2 hours!  It was exhilarating!  Some of my favorite memories were performing "The Lord is Kind & Mysterious" my psychedelic tribute to God, rapping my infamous "Pen To Paper", and being a real classical music badass!  I also enjoyed mixing in some folk music and my own singer/songwriter originals on the geetar.  Nate said at the end that it was, "the best party I've ever been to!"  Big thanks to everyone who showed up.  Following the party Adam, Tyler, and I hung out playing yard games, hacky sack, and Sing Party for Nintendo Wii U.  Yeah, that's right I have a Wii U...  What was I thinking!?  It's kinda a P.O.S. but hey it's actually fun to have some times.  We also went out to see Logan with my roommate, Mike.  Great movie but just a little gory! 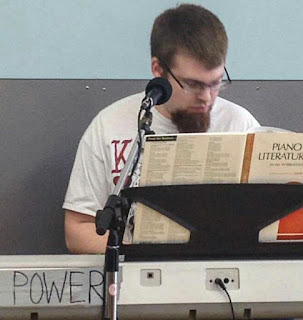 The following weekend my dad took me to a genuine BLUE OYSTER CULT concert!  Like woah it was amazing!  I especially liked the 3 guitar harmonic soloing and those insane vocals.  Next day I went out to Tyler's farm in Regal.  We went for a ride in his new electric golf cart and, I shit you not, damn thing went dead in the middle of nowhere.  His dad towed us back, 5 minutes later works fine WTF.  This sort of plays into the new "Don has bad luck theory" long story.  My joke now is that I have bad luck but good karma.  Karma must be good seein's how I beat him at cribbage and I haven't played in years! 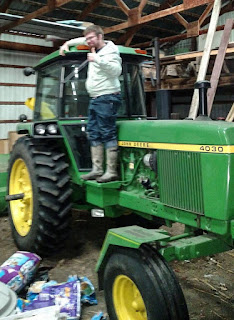 Me, Dustin, and Ashlie are working on a Olmstead project now.  We plan to integrate people with disabilities by getting them into apartments of their own.  This is also something I am looking to do. We will be hosting tours of apartments and group homes to give people ideas of more independent options.  I am now realizing that this really is work.  Nevertheless I'm so happy to be doing this!  This is our time to shine and make a big difference for the disabled community and the community as a whole.  We are getting a grant to pay for a bus driver, maps, pamphlets, and a dinner for all at Pizza Ranch.  Olmstead Academy starts again April 18th through 21st.  I can't wait to see all my new friends again! 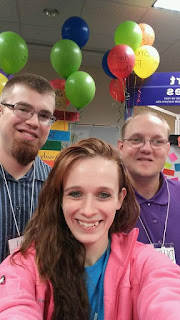 Special Olympics Basketball was last weekend, my team took 2nd in State.  We played really hard each game but that last team got us.  Oddly enough they weren't the most aggressive, the 2nd team we played were some stone cold brutes.  But we showed them who's boss!  After our two games the first day we got a dance.  And who should show up but CRUNCH!  Crunch is the mascot of the Minnesota Timberwolves.  He did some sweet trampoline dunking and I shouted my lungs out with cheers!  The guy who DJed the dance was also really good.  I had a blast! 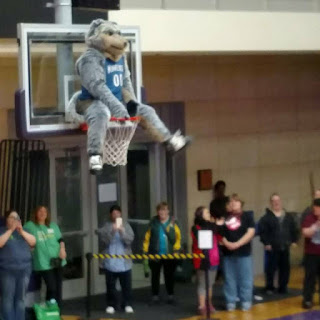